“Land must be returned to blacks who best know how to use their land”. DA

This came as a shocker to some persons in South Africa, as the DA makes a shocking pronouncement about  land in SA.

“Our plan we will return land to the people through the biggest land redistribution in  South African history. All tribal land will be given to those living on it, and all government -owned land that isn’t used will be divided among all black people.

Title deeds will be given to urban housing beneficiaries and farm workers will become partners in the farms they work on.

This will make black black people the majority owners of land in South Africa. People will own this land directly, because they are the ones who best know how to use their land”.

Everyone has a better plan for redistribution of land!

What about the only honest plan when you want to obtain something that belongs to someone else: Work until you can afford it and then make an offer and buy it.

You can call it “redistribution” 1000 times a day – everybody knows it is merely stealing. 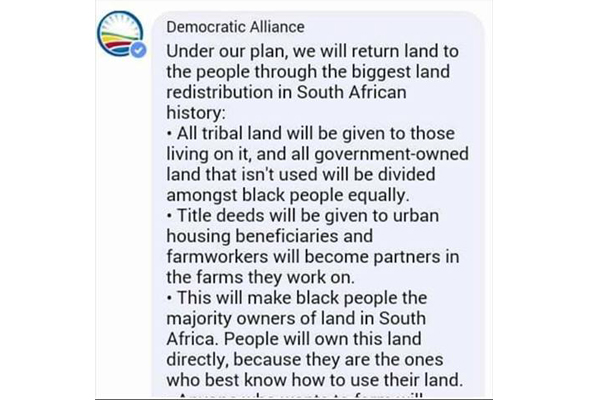 ← Newer Post
Official!! Khoza Reveals That Five Pirates Players Are Now Making Their Way Out From The Squad,
Older Post →
Malema in hot water as Gordhan opens criminals charges against him.